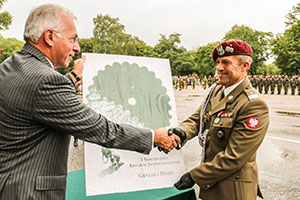 Driel – Thursday, September 24th, 2015 a ceremony took place in Krakow during which the start of the 1st Polish Independent Parachute Brigade was commemorated. The Board of the foundation Driel-Poland was invited to the commemoration and, the following day, presented the Museum of the 6th Airborne Brigade with a photo exhibition.

In the early 1990s Cora Baltussen acquired the photo exhibition and her intention was to return it to Poland so that the story of General Sosabowski and his paratroopers could also be spread throughout Poland.
In addition to this original version, a modernized version was transferred to the Polish Army Museum in Warsaw this year at the beginning of April. Another copy of the modernized version is available at the Embassy of the Republic of Poland in The Hague. This will be used during special occasions.
Stichting Driel-Poland has now realized Cora Baltussen’s wish. Historical background:  The 1st Polish Independent Parachute Brigade was formed in Scotland on September 23, 1941 with the objective of returning to occupied Poland via the shortest route, either directly or by air, to support the armed underground resistance in the uprising.

Unfortunately this was never achieved because, due to British pressure, the Brigade was used in Operation Market Garden near the village of Driel during the Allied advance in Western Europe.

General Joks, members of the Brigade 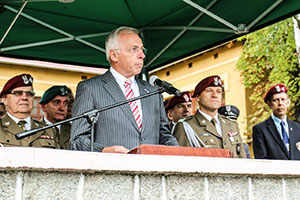 In the early 1990s Cora Baltussen, when she was already 80 years old, heard of a photo collection that had been compiled in Poland by Mr Stefan Bałuk. He was a member of the Brigade and part of the Cichociemni.

From the contacts and correspondence with members of the Brigade in Poland it became clear to Cora that at that time little was known about  General Sosabowski and his Brigade in Poland.
In 1994, after some consideration and with the support of sponsors  she bought the photo-collection with the aim of bringing it back to Poland so that the  story of General Sosabowski and his brigade could be spread across Poland.
She shared her ideas about this primarily with  the men of the Brigade and they were also growing old. In fact one of them wrote “I am only too conscious of the fact that we are getting older.”
Tragically at the time of her death she had not been able to complete her plans.

This photo collection  was held in the archives of our Foundation and the idea behind it was known to our board. Cora’s wish was clear. The photo exhibition had to return to and find a place in Poland.
Contacts with the Polish Embassy in the Netherlands made it clear that it would be necessary to adapt the texts used to the rules governing the present day Polish language. In 2013, the Polish Embassy started to work on this and completed the process a year later.

The presence of Professor Wawer and his colleagues of the Polish Army Museum at the September 2014 commemoration in Driel was – for us – a great opportunity to bring the photo collection and the purpose behind it to their attention. They were enthusiastic and willing to take this photo exhibition into their own collection and so  bring Cora’s wish to fulfillment.  Namely that  this collection  would be exhibited throughout Poland. They have pledged to use their network for this purpose.

The renewed version of the photo-exhibition has been handed over to the Polish Army Museum on April 1st when the Ministers of Defense from the Netherlands and Poland, Mrs. Hennis-Plesschaert and Mr. Siemoniak, visited that museum.
As board of the Foundation Driel-Poland, we are deeply grateful that by transferring this collection to  the Polish Army Museum we have fulfilled Cora’s wish.

The original version of the photo collection has been symbolically handed-over to General Joks on the meeting in Warsaw on 1st April.
I am very pleased that today we can hand over the complete original version of the photo-exhibition to General Joks so it can be added to the collection of your Museum in the barracks somewhere else in this beautiful city.

We are convinced that for your Brigade this photo-exhibition is a valuable addition to the existing collection of your museum.