On 21 September 1944, 1003 parachutists of the 1st Polish Independent Parachute Brigade landed in Driel and the surrounding area to participate in the Battle of Arnhem.
A year after this date a committee was founded, the Driel–Poland Committee (now called the Driel-Poland foundation), with the objective of keeping the memory alive of the contribution of the 1st Polish Independent Parachute Brigade to the Battle of Arnhem, by organising a commemoration on an annual basis, disseminating information about the contribution of the Polish soldiers to the Battle of Arnhem and involving the residents of Driel in the commemorations.

On 21 September 1945 the residents of Driel undertook to upkeep the graves of all the Polish soldiers that had fallen in battle. The following year flowers and plants were brought to the graves of the Polish parachutists, who shortly before that had been reburied at the Airborne Cemetery in Oosterbeek.
In December 1946 the school children sent Christmas greetings to all the parachutists who had fought in Driel.
In February 1947 the Polish parachutists donated a large sum of money for the reconstruction of the boys’ school, which had served as a military hospital during the battle. In May 1949 the rebuilt school was given the name St. Stanislaus Kostka School, the street on which the school was located was named Casimirstraat and the former village square was renamed Sosabowski square.
The administration of the former municipality of Heteren, to which Driel belonged, bestowed honorary citizenship on Major General S.F. Sosabowski on 18 September 1954.
The residents of Driel offered a banner on 12 September 1959 to the Veteran Association of the Polish airborne troops.

History of the commemorations
A commemoration has been held in Driel every year in September since 1946. Many veterans of all ranks and from all corners of the world have visited Driel throughout the years and participated in the commemorations.
The first, temporary, Polish War Monument in Driel was unveiled on 21 September 1946 by Lieutenant-colonel A. Szczerbo – Rawicz.
The definitive War Monument, manufactured by the sculptor J. Vlasblom from Rotterdam, was unveiled on 16 September 1961. Major General S. F. Sosabowski carried out the unveiling.
After that, the monument was entrusted to the care of the administration of Heteren – since 1 January 2001 called the municipality of Overbetuwe.
The pedestal symbolises the Polish people. Some Polish earth is stored within it. It is located on a spot which is removed from the daily noise and flanked by both the Polish and Warsaw coat of arms and crowned with the emblem of the Polish brigade.
A dynamic concrete creation sits atop of the pedestal, which represents the Polish strength of mind and fearless courage. The figure of youth can be seen; the future that carries freedom as a precious thing, as something really valuable in its hands.
During dark periods it seems like this figure disappears, but this only appears to be the case. In reality freedom is always there and concentrating on national strength, it gives Poland courage and strength of mind and always appears again.
On 18 September 1969 all the Polish veterans, who had fought at Driel, received a commemorative medal.
The Lest We Forget foundation has been providing financial support since 1979 to the veterans who live in Poland to enable them to attend the commemoration.
On the occasion of the 35th commemoration of the airborne landing at Driel a pillar was erected on both sides of the monument.
One pillar has a memorial stone with the names of all the 94 officers and men of the 1st Polish Independent Parachute Brigade who were killed.
The Polish coat of arms and the memorial stone, which formed a part of the temporary monument, were attached to the other pillar.
In September 1987, the children of the three primary schools in Driel undertook to upkeep the monument.
During the summer of 1991 the square around the monument was reconstructed and given the name Polenplein – Plac-Polski.

Rehabilitation
On 9 December 2005 the Dutch government decided to award the Military Order of William to the 1st Polish Independent Parachute Brigade for their very admirable acts of bravery, leadership and loyalty shown during the Battle of Arnhem in September 1944. It was also decided to award Major General S.F. Sosabowski, the commander of the brigade, posthumously with the Bronze Lion.
On 31 May 2006 Her Majesty the Queen conferred the Military Order of William on the Binnenhof in The Hague, by attaching the decoration to the banner of the 6th Polish Air Assault Brigade from Krakow (Poland), which continues the tradition of the 1st Polish Independent Parachute Brigade. The grandsons of the general, in the name of their grandfather, received the decorations belonging to the Bronze Lion from Queen Beatrix.
The history behind the conferring of honours was featured prominently in the documentary “God Bless Montgomery – The forgotten Poles in the Battle of Arnhem” from investigative journalist Geertjan Lassche, broadcast by the Evangelische Omroep on 14 September 2004.
He made this documentary following an interview with Cora Baltussen, who had experienced the Sosabowksi-brigade as a nurse and who already in 1961 pleaded for the rehabilitation of the Polish brigade.
In the documentary the letter from Queen Wilhelmina from 1946 is shown, which includes the approval to award a royal bravery award to ten members of the Sosabowski brigade.
This letter and the interview with Prince Bernhard in which he expressed the desire to still confer the honour, were reason for the government to implement the motion to carry out an investigation that was passed by the entire House of Representatives of the States General into still conferring the honour posthumously.
The Chapter of the Military Order of William received the order to carry out an investigation in December 2004. 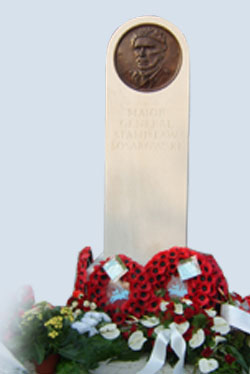 Veterans of the 1st British Airborne Division and the Parachute Regiment Association welcomed the rehabilitation of the 1st Polish Independent Parachute Brigade and founded a committee with the objective of setting up a fund to establish a monument on the Polenplein – Plac-Polski in Driel.
This monument, a pedestal with a bronze plaque on it showing Major General S.F. Sosabowksi (designed by the famous sculptor Vivien Mallock), is a tribute to their beloved Polish comrades. Without their courage and fighting spirit, the survivors of the 1st British Airborne Division would not have been able to escape.
The monument was unveiled during the annual commemoration on 16 September 2006 by Dr. M.H. Sosabowksi, great-grandson of Major General Sosabowski.  On behalf of Her Majesty the Queen the ceremony was attended by the Chief of her Military Household, Lieutenant General A.J.G.M. Blomjous.
Apart from Sir Brian Urquhart KCMG MBE and his wife, Major A.J. Hibbert MC and several other members were also present from the “Major General Stanislaw Sosabowski Memorial Appeal”.
A year later the plaque with the accompanying text was presented (see back of this brochure).