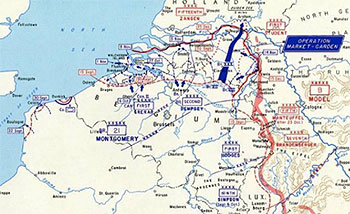 Three divisions, made up of American, English and Polish parachutists would be dropped behind the German lines. Their assigment was to occupy the roads and bridges between the front line and the city of Arnhem. By that they would clear the way for the Allied Forces to reach the north sideof the river Rhine. The entire operation would last 2 days. The Battle of Arnhem, however, lasted 9 days and ended in the last German victory during World War II.The 1st Allied Airborne Forces under the command of Lieutenant-General Lewis Brereton was assigned for the Airborne Operation ‘Market’.

The British 1st Airborne Division, under the command of Major-General Roy Urquhart, and the 1st Polish Independent Parachute Brigade, under the command of Major-General Stanisław Sosabowski, were to occupy the main bridge, the pontoon bridge over the river Rhine at Arnhem and the railway-bridge at Oosterbeek. In addition to this the German anti-aircraft batteries around Arnhem had to be destroyed.

While drawing up the plans for the Airborne operation ‘Market Garden’it turned out that there was too little airlift to transport the entire invasion army in one lift. Three days were needed to carry out this operation. In retrospect this proved to have been a wrong decision for after the first day of the droppingsthe element of surprise lacked, an indispensible condition for the success of the airborne operation.

During the preceeding briefing Major-General Sosabowski had drawn attention to this fact. Moreover, the reports of the information office on the strength of the German army in the region where the Airborne operation was aimed turned out to be incorrect.

Against all expectations of the Allied Forces the Germans were able of  taking ready and successful counter attacks.

Units of the 2nd SS Pantzerkorps and German troops that were camped elsewhere in the Netherlands and in Germany besieged Major-General Urquhart’s Airborne Division.

Near Veghel and Son the US 101st Airborne Division of approximately 6,700 soldiers landed. They reached most of the set targets: Sint Oedenrode with the bridges over the river Aa and the Willems canal. Unfortunately, at Son the bridge was blown up. The first lift of the US 82nd Airborne Division of approximately 7,000 soldiers landed near Grave and Groesbeek. The bridge over the river Maas, the bridge across the Maas-Waal canal and the hills around Groesbeek were occupied next. The bridge across the river Waal in Nijmegen remained in German hands.

In Arnhem, the most northern position of the operation Market Garden, the 2nd Parachute Battalion under Lieutenant-Colonel John Frost reached the road bridge almost unhindered. The Germans blew up the railway-bridge. The 2nd Battalion captured the houses on the northern side. It turned out to be impossible to reach and hold the southern bridgehead, which remained in German hands and their troops obstructed every movement on the bridge.

On 18th September 1944, the weather forecast was bad. Because of fog and low clouds the 4th British Para Brigade (commander Brigadier J.W. Hackett) and the gliders in which their equipment had been loaded departed with a delay of 6 hours. Moreover, there also were gliders with units which had not been towed on the first day and a detachment Poles with five 6-pounder anti-tank guns.

After the landing the Poles reported to the British Headquarters which was set up in the Hartenstein hotel in Oosterbeek. War correspondent Marek Swięcicki, the Warrant Officer, was among these Polish soldiers. His first report to England sounded very enthousiastic.

In spite of repeated violent German attacks, on the second day after the landing, the 2nd Parachute Battalion could preserve the northern bridgehead of Arnhem’s bridge.

The efforts of the 1st and 3rd Parachute Battalions to reach the bridge as well, were unsuccessful because of strong German opposition in the outskirts of Arnhem.

On 19th September the entire Polish Independent Parachute Brigade was to be dropped south of the Rhine-bridge, near Arnhem. Because of the persistent thick fog the departure was cancelled. The troops, in highest grade of readiness, had already boarded and disembarked the aeroplanes three times. That day only 35 gliders left the airfield with 18 6-pounder anti-tank guns and the jeeps of the Polish medical unit.

There was heavy fighting near the intended landing-zones for the Polish gliders north of Oosterbeek near Papendal. The gliders landed in the centre of the fight. They suffered heavy losses. The aeroplanes were shot at when still in the air or just after touch down. Several gliders caught fire and the available equipment was lost. Five out of 87 soldiers died while eleven were wounded. Only 3 out of the 18 6-pounder guns could be rescued.

Because of these losses the Polish Brigade lacked the required strength later on during the battle. In the meantime there was heavy fighting near the bridge in Arnhem. The Germans had overcome their surprise and with all their strenght tried to eliminate the Airbornes.

From all over the Netherlands and also from Germany units were sent towards Arnhem. The British were able to keep the northern bridgehead but there were heavy  losses. Attempts of 4 battalions namely the1st, 3rd, 11th Parachute Battalion and the 2nd Battalion of  the South Staffordshire Regiment to reach the bridge failed because of German troops near Arnhem which had now been strenghtened with motorized guns.

At daybreak on Tuesday morning 19th September Major-General Urquhart returned to headquarters which was now set up in the Hartenstein hotel in Oosterbeek. On the previous day during the enemy actions he was cut off from his forces  and had to hide in an attic.

Desperately the remnants of Frost’s 2nd Battalion fought near the northern bridgehead in Arnhem.The intended landing-zone of the 1st Polish Independent Parachute Brigade south of the Rhine bridge could no longer be used. Therefore the Polish Brigade was to be parachuted into Driel. Subsequently they had to cross the Rhine in order to reinforce the British Airborne Division.