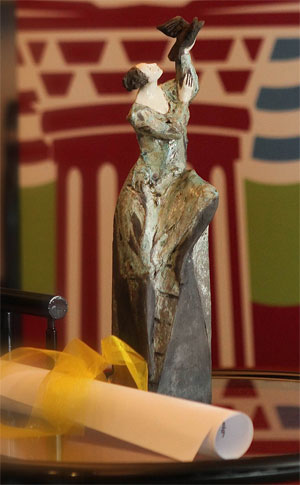 During the municipality Overbetuwe’s New Year’s reception the volunteer prize for the best volunteer in the municipality was awarded to the Driel-Poland Foundation and its volunteers.
On behalf of the Foundation Niek Jacobs, treasurer and coordinator of volunteers, received the award.
Mayor Toon van Asseldonk recalled the way in which the commemoration of 70 years of Operation Market Garden Garden had been organized in Driel and that the Dutch King Willem-Alexander and the Polish President Komorowski had both been in attendance..
Van Asseldonk said  the way this commemoration had been organized by Foundation Driel-Poland and its many volunteers represented “a top performance at the highest level”. The volunteer’s prize included a statuette and a certificate.
In his speech Arno Baltussen, president of the Foundation Driel-Poland, stressed the importance of the work done by  the volunteers during the annual commemoration and at other times in the year. Since 1946, the annual commemorations has been supported by many volunteers. The relationship with the 1st Polish Independent Parachute Brigade and Poland in general is in the DNA of the village of Driel.
He took the opportunity to thank Mayor van Asseldonk and all the employees of the municipality of Overbetuwe for their support in the past and for recognizing that 2014 had been a particularly strenuous year. He hoped that this collaboration would continue for many years to come.

Volunteers prize “Het Toonbeeld” for 2014 has been awarded to:

Driel–Poland Foundation and its volunteers


For years the Driel-Poland Foundation together with its volunteers has organized the Commemoration in Driel. A commemoration that remembers the contribution of the 1st Polish Independent Parachute Brigade to the Battle of Arnhem and Operation Market Garden. It is a commemoration with a special character. One that is of great significance for Overbetuwe, the Polish community in the Netherlands and Poland.

In 2014, the 70th anniversary of Operation Market Garden was attended by King Willem-Alexander and President Komorowski of Poland. Other dignitaries included Secretary of Defence Mrs. Plasschaert and the ambassadors of Poland, Britain, the United States and Canada as well as the Dutch ambassador to Poland. Their presence was a great honour for the municipality of Overbetuwe, Driel and the Foundation Driel-Poland. Twelve Polish veterans also participated in the ceremony.

The jury also found it important to mention that, in awarding this prize, volunteers in our community who often remain in the background even though they are very much needed would be put in the spotlight.