The photo-exhibition acquired by Cora Baltussen in 1994 has been transferred to the Polish Army Museum on 1 April 2015. By this handover Cora’s wish has been fulfilled. 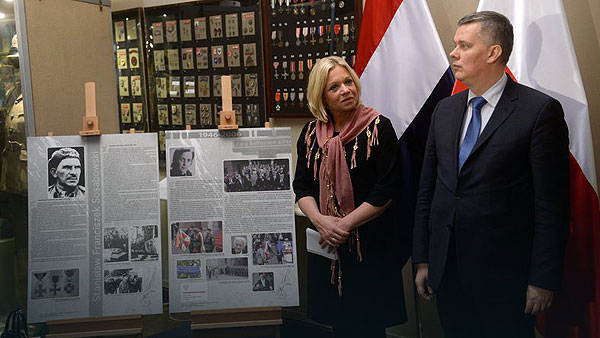 On 21 September 1944, Cora Baltussen, my aunt , got in contact with General Sosabowski and his adjutant Dyrda immediately after the troops of the 1st Polish Independent Parachute Brigade had landed near Driel. During the six days that followed, she was active as a nurse and was in regular contact with the wounded soldiers and those who continued to fight.
When she returned to Driel in the Autumn of 1945 she, like other villagers,  got in contact with the men of the Polish brigade who visited Driel to pay tribute to their comrades who had been killed. At that time they were  part of the occupation army stationed just over the border in Germany.

In the documentary “God Bless Montgomery” she talks about her contact with the injured Polish troops. She explains how much this affected her life and how a dying Polish soldier said to her, “Bring my love to Poland, to my country, to my family please. God bless Poland.”
It was  this sentence among others that lead to her social commitment to stay in touch with General Sosabowski and his brigade for the rest of  her life. Once she became aware of the injustice that had been done to them immediately after the war she took several steps to try to get this corrected.
This is why the veterans later on called her “the Mother of the Brigade.”

In 1946, together with her brother Albert and the heads of the local schools she established the Committee Driel Poland. From that moment she was very active in  maintaining the link between General Sosabowski and his troops and the people of Driel.
She continued to  liaise with General Sosabowski. Between 1950-1960 when she  travelled for her study and work to England and America she attended meetings of associations made up of former members of the Brigade who were unable to return to their homeland.
From the 1970’s onward she kept in touch with some of the men who had been able to return to Poland. Initially with Mr. Dyrda, the former adjutant of General Sosabowski, but later with others as well.

So it happened that in the early 1990s, when she was already 80 years old, she heard of a photo collection that had been compiled in Poland by Mr Stefan Bałuk. He was a member of the Brigade and part of the Cichociemni, a group of parachutists who undertook covert actions during World War Two in occupied Poland.
From the contacts and correspondence with members of the Brigade in Poland it became clear to Cora that at that time little was known about  General Sosabowski and his Brigade in Poland..
In 1994, after some consideration and with the support of sponsors  she bought the photo-collection with the aim of bringing it back to Poland so that the  story of General Sosabowski and his brigade could be spread across Poland.
She shared her ideas about this primarily with  the men of the Brigade and they were also growing old. In fact one of them wrote “I am only too conscious of the fact that we are getting older.”
Tragically at the time of her death she had not been able to complete her plans.

This photo collection  was, of course part, held in  the archives of the Foundation Driel-Polandand the idea behind it was  known to our board. Cora’s wish  was clear. The photo exhibition had to return to and find a place in Poland.
Contacts with the Polish Embassy in the Netherlands made it clear that it would be necessary to adapt the texts used to the rules governing the present day Polish language.  In 2013, the Polish Embassy started to work on this and completed the process a year later. We are very grateful for the improvement made to the text and to the adjustments made to the layout of the panels to bring them up to present-day standards..
The presence of Professor Wawer and his colleagues at the September 2014 commemoration in Driel was – for us – a great opportunity to bring the photo collection and the purpose behind it to their attention. They were enthusiastic and willing to take this photo exhibition into their own collection and so  bring Cora’s wish to fulfillment.  Namely that  this collection  would be exhibited throughout Poland. They have pledged to use their network for this purpose.

Two of these panels are presented here around us today.

As board of the Foundation Driel-Poland, we are deeply grateful that by transferring this collection to  the Polish Army Museum we can fulfill Cora’s wish.
The original version of the photo collection will also have an excellent destination. Following the official transfer of the now up-dated photo exhibition we will symbolically hand over the original version to  the Commander of the 6th Airborne Division so it can be included in the collection of the Museum of the Division in their barracks in Krakow.

Visiting Driel and surroundings in September last year obviously professor Wawer also visited the Airborne museum in Oosterbeek. During the opening of the exhibition of General Sosabowski’s  uniform, borrowed from the museum here in Warsaw, professor Wawer noticed the Bronze Lion  presented close to the uniform which is in loan from the Sosabowski family.

He asked whether it was possible for his museum to acquire a copy of the posthumously awarded Bronze Lion to be added to the uniform when it is returned.

I am happy to let you know that on our request the Kanselarij der Nederlandse Orden was extremely  willing to fulfil your wish. This is reason why I will be able to present to you a copy of the Bronze Lion as well as the related charter.