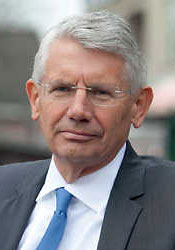 ‘Bring my love to my country, bring my love to Poland’
Those were the last words uttered by a dying solider from the 1st Polish Independent Parachute Brigade in September 1944. His words were addressed to Cora Baltussen.

These are words which I, as Mayor of the Municipality of Overbetuwe, recently heard for the first time. Just a single sentence comprising a few words and yet those very words, when heard in this context, touch one’s soul. They are words of love. Love for the country where he was born and where he grew up, a country he saw occupied by the Germans in 1939.
Words for those he loved, whom he had to leave behind and whom he would never see again. Nor would many of his comrades who survived the Second World War ever see their home country, their family or their friends again.

The 1st Polish Independent Parachute Brigade was set up in 1941. They were trained in Scotland to join the battle against the German occupiers of their beloved Poland, together with the Polish resistance. When the uprising began in Warsaw in August 1944, the hope was for a rapid deployment in their home country. However, that hope was soon dashed. The drop and deployment was not in Warsaw but rather in the Dutch town of Driel, near Arnhem. The 1st Polish Independent Parachute Brigade, including the soldier who uttered those words, were given the order to land here in Driel, cross the Rhine and provide reinforcement for the British 1st Airborne Division, which was besieged in Oosterbeek. These Polish soldiers were dropped on 21 September 1944. Exactly 69 years ago.

However, these soldiers would not return to Poland. Not even after the capitulation of Nazi Germany in May 1945. The 1st Polish Independent Parachute Brigade left for Germany, albeit without our unknown soldier, as part of the occupation forces and it was subsequently dissolved in 1947. Yet even after this most of the soldiers did not return, despite assurances from the British government that they could return to their home country safely. Many, including General Major Sosabowski, decided to start new lives in the Netherlands, Belgium, England, America and Canada. Some were never to return to their beloved Poland, from which they had been separated for so long, and others would only return many years later.

The dying solider I referred to earlier, together with his comrades from the 1st Polish Independent Parachute Brigade, fought against the occupation forces here, 69 years ago, in order to give us back our freedom. They may very well have asked themselves whether they would ever see their own country freed. This question can only be answered by the soldiers from the brigade, eight of whom are in our midst today.

To them and all of the Polish participants in this commemoration, referring to the last words of the dying Polish soldier, I would like to say, “Bring our love to your country; bring our love to Poland” because we are eternally grateful to you for giving us back our freedom.