Speech by the President of the Republic of Poland
His Excellency Mr. B. Komorowski 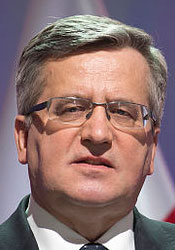 at the 70th Commemoration of the contribution of the 1st Polish Independent Parachute Brigade to Market Garden
Driel, 20 September 2014
Your Royal Highness, dear Veterans, Excellencies, ladies and gentlemen, gathered here today on the Polish Square in Driel.

“The shortest road, the shortest road to Poland” – that was the motto of the 1st Polish Independent Parachute Brigade that General Stanisław Sosabowski had formed in Britain from the soldiers who had made their way west – after the defeat of September 1939 – to continue the struggle for Polish freedom.
“The shortest road”, but that road to a free Poland turned out to be very, very long.
The brigade formed part of the Polish Armed Forces. They included Polish Air Units, the Polish Navy fighting in the Atlantic and the Mediterranean, the First Armoured Division of General Maczek, which fought in battles in Normandy, Belgium, the Netherlands and Willemshaven in Germany, and the Polish Second Corps in Italy, which – under the command of General Anders – fought from Monte Cassino up to Ancona.
At the same time, in occupied Poland, the Polish Underground Army – made up of several hundred thousand soldiers – prepared for a Polish-wide, national uprising.
The 1st Polish Independent Parachute Brigade was supposed to support the uprising. Its soldiers believed that they would be the first to return home with weapons in hand, the first to give help to the Polish Underground Army. This is what they dreamed about; this is what they had prepared for.
But World War Two shattered Polish dreams and plans.
On August 1, 1944 Warsaw – the Polish capital – rose up to fight an unequal battle with the German occupiers. The battle lasted 63 days and claimed some 200,000 victims – underground soldiers and civilians.
On Stalin’s orders, the approaching Soviet army stopped its offensive and gave the Germans time to crush the Warsaw Uprising. On Hitler’s orders, Warsaw should cease to exist. This order was almost completed carried out.
The soldiers of the 1st Polish Independent Parachute Brigade ended up fighting not at home but here, on Dutch soil, in the unsuccessful allied operation Market Garden, in which they covered the retreat of British units.

Polish soldiers fought and sacrificed their blood for the freedom of the Western world, for the freedom of other nations, as well as the freedom of the Dutch.
They fought, although their hearts bled with pain because they knew that in Poland, in Warsaw, their countrymen and their families were dying, that the capital was turning into ruins, that the Iron Curtain was already falling, leaving Poland on the Eastern side, as part of the Soviet sphere of influence taking half the territory of the pre-war Polish state with it.
Therefore, today, on the 70th anniversary of that dramatic battle and the 25th anniversary of the recovery of Polish freedom and our return to the great family of the West, I not only want to pay homage to the Polish paratroopers who died on Dutch soil. I also want to thank the Dutch people, Your Majesty and the entire royal family for commemorating the Polish contribution to the struggle for freedom in the Netherlands. For your care of the graves of Polish soldiers.
I would also like to thank the Dutch people and especially the people of Driel for this site and for your concern as expressed in the monument to General Sosabowski.
I also want to express my gratitude to the Polish soldiers whose sacrifices lead to making it possible for us to work together to create a Europe of free nations and free people. Being able to rejoice together that the Iron Curtain, which had separated European nations for so many years, is now gone.
We can be glad that today we are together in the North Atlantic Alliance and the Europian Union.
Then, the shortest road was not possible. Today, after a long, very long road, we are free again, free again together.