Address by Undersecretary of State at the Ministry of Foreign Affairs of the Republic of Poland, Professor Janusz Cisek 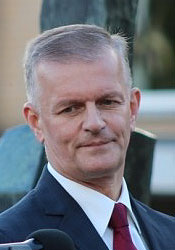 68 years ago, in the surroundings of Arnhem, the biggest air-borne operation of World War Two under the codename of Market Garden began. Over 40.000 American, British and Polish paratroopers and glider infantry took part in it. As every year, we have gathered here in Driel in order to commemorate this great event and honour the fallen and survived heroes of the Battle of Arnhem.
However, this year’s anniversary seems to be unique as September 2012 was announced by the Polish Senate as the month of General Sosabowski due to his 120th birth anniversary. This is one of the reasons why I myself have decided to join the event this year.

Honourable veterans,
The Independent Airborne Brigade fulfilled its task in the battle of Arnhem, an arduous and almost impossible task. It left the battlefield unbeaten, although the operation Market Garden ended in defeat. The Brigade lost a lot of blood – over 20% of its manpower fell. Nevertheless, the Brigade maintained its combative spirit until the very end. General Sosabowski turned out to be a genuine commander who was able to raise and keep the spirits. The Brigade had shown the highest qualifications of a soldier: discipline, courage and sacrifice. It had gone down into history as the first Polish airborne unit engaged in combat. I pay tribute to you for your unsurpassed courage, patriotism and determination. You went into mortal combat so that we could enjoy peace and democracy.
Your combativeness and courage shown 68 years ago are the best example and inspiration for us nowadays in our endeavours to maintain peace and security in Europe and all over the world. Let us remember that the European Union, which Poland could join only a couple of years ago, was born from the bitter lessons of history of World War Two. The European Union is a unique project, guaranteeing generations of Europeans a life in serenity and prosperity.

Honourable Dutch friends,
I desire to express my sincere thanks to you for maintaining the memory and gratitude. I am grateful to the inhabitants of Driel and other places in the Netherlands, where Poles had fought, I solemnly thank the Dutch population. Special appreciation is due to Cora Baltusen, the founder of the Driel-Polen Foundation, to her family and all those who have been cultivating the memory of general Sosabowski’s soldiers in the Netherlands. Many times have the word gratitude been mentioned. This word seems to be the key to understanding why we do annually celebrate the battle of Arnhem. I like the French proverb defining this word: “Gratitude is the memory of the heart”.
Yesterday, Ambassador of the Republic of Poland in The Hague, dr Jan Borkowski, on behalf of the Polish President gave medals to all the members of the Chapter of the William’s Military Order from 2006. They were awarded for their hard and difficult work put into the honoring the banner of the Independent Airborne Brigade with the William’s Military Order. They also participated in granting the Order of the Brown Lion to General Stanisław Sosabowski.

Ladies and Gentlemen,
It is only natural that reminiscences of the past has been fading away. We have to be grateful to all the people willing to keep them alive. Gratitude is the memory of the heart. Gratitude makes sense of our past, brings peace for today, and creates a vision for tomorrow. If so, let us indulge in history and think of those who gave us a chance to live in peace and prosperity.
Let me thank once again all those, who were engaged in the organization of this year’s commemorations, which have – as always – moved the hearts and minds of the participants.

I thank you for your attention,
Dank u wel voor jullie attentie!