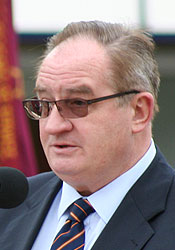 It is my honour, as the Head of the Polish Delegation in the EPP and the son of a soldier of the WWII, to be here and to celebrate with you 66th anniversary of the battle of Arnhem.

Thank you very much for your kind invitation. It is my pleasure to be here.

I am grateful to be able to participate in the process of bringing back and cherishing the memory of General Sosabowski as well as that of all the Polish soldiers who fought in Western Europe.

During WWII, Poland, despite its own hardships and ordeals under the enemy’s occupation, was a loyal partner of the Allies fighting in Western Europe. The united and independent Europe should remember the sacrifice of the Polish nation. After all, the freedom that Europe cherishes today is, to an important extent, the merit of Polish soldiers fighting outside of its occupied motherland, soldiers who ‘fought for Europe but died for Poland’.

My particular gratitude goes to all the veterans fighting in the operation Market Garden, which was one of the events leading to the liberation of the Netherlands. Dear Veterans, I am immensely grateful for your courage and determination during the war and the honour to be here with you is all the greater.

Unfortunately, not all the Poles saw their efforts and heroic deeds duly recognised after the War. General Sosabowski, Commander of the 1st Polish Independent Parachute Brigade, is one of them. Norman Davies did not hesitate to call General Sosabowski the scapegoat of General Montgomery, who was looking for someone to blame for the failure of the Garden Market operation in 1944.

Ladies and Gentlemen,
I would like to refer to an excerpt from General Sosabowski’s memoires, which fully depicts the devotion and strength of the Polish fight: ‘The will to act is shaped in difficult times. Hardships and ordeal render the gain extremely valuable. We praise the work we put a lot of effort into, the effort of the body and the soul, the will to build what we believe in and what our existence is worth’.

It is precisely this, General Sosabowski’s and his soldiers’ unique will to act and fight, that needs to be transmitted to future generations of the Polish Europeans. Dear veterans, the example you give, the example of war-time patriotism needs to be continued and translated into its modern version, into shaping young people’s attitudes, their fidelity and devotion.

In return for all his efforts in the name of a free Europe, after the war the Polish general did not receive any support or assistance which would help him lead a decent life. He received no military pension and worked for many years as a warehouseman. His fate fully deserves the title of General Sosabowski’s memoires from London, „Droga wiodła ugorem”, which holds the English title ‘Freely I Served’ but which can be rather translated as ‘The road through the fallows’.

Therefore, I am happy to participate in events which bring back the glory of the Polish soldiers, the late Cora Baltussen’s great commitment to the Polish cause, without which we probably would not be here today, the activities of the Polen-Driel Association, which keeps the memory of the General and his brigade.

I find it extremely moving that it is not the governments or politicians but ordinary Dutch citizens, the inhabitants of Driel, who have been and still are the advocates of re-establishing General’s honour and memory. Thank you for that.

I am most grateful to the Dutch citizens who seemed to have always appreciated Polish soldiers. A couple of days after the battle one could see big banners saying ‘Thank you Poland’ in the Dutch windows. It is the Dutch who awarded General Sosabowski with a number of highest military degrees. Finally, it is here, in the Netherlands, that we have one of the richest collections of documents and souvenirs after the 1st Polish Independent Parachute Brigade, gathered with a lot of passion and care by Mr Eric van Tilbeurgh.

Polish-Dutch history abounds in important momentums. The already mentioned military degrees awarded to the General and his Brigade, the visit of the Polish Prime Minister Donald Tusk and the Dutch Prime Minister Jan Peter Belkenende during last year’s celebration. A great documentary was made by a Polish director Joanna Pieciukiewicz, ‘General’s Honour’, which I had the pleasure to present in the European Parliament in May. Let it be only the beginning of common endeavours.

I hope that General Sosabowski’s brigade, which linked the history of our two nations, will remain present not only in the Polish and Dutch memory, but also that of the entire Europe.