Address by the Ambassador of the Republic of Poland, Dr Janusz Stańczyk 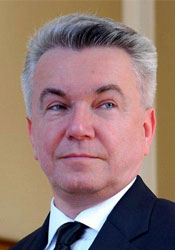 Madam Mayoress,
Excellencies,
Dear Members of the Families of General Sosabowski and Cora Baltussen,
Ladies and Gentlemen,
We meet here every year to honor the heroes of the Battle of Arnhem. This is the 66th anniversary of the battle. Though the participants and witnesses of those events become fewer every year, the memory lives on – the new generations do remember.
They remember the heroism of the Polish paratroopers and the dedication of the Dutch civilians. The bonds that were then established have evolved into Polish Dutch-Friendship between ordinary people and between the two states – the latter evidenced by the participation of the Polish and Dutch prime ministers in last year’s ceremonies. And each one of us experiences manifestations of inter-human friendship every day. That is why participation in today’s ceremony gives me such a great satisfaction.

Dear Veterans,
A bitter fate befell the soldiers of the 1st Polish Independent Parachute Brigade and their commander, General Stanisław Sosabowski. And yet, as the General himself put it, their hearts yearned for Poland, their hearts yearned for battle…From the very inception of the unit you believed that you would return to Poland by the shortest route – a parachute landing.
But history denied that to you, despite the pledge that you would be allowed to come to the aid of embattled Warsaw. Though your hearts yearned for Poland it was your fate to fight for freedom alongside the Allies on Dutch soil, at the Battle of Arnhem. But Operation Market-Garden did not bring a victory to the Allied. The defeat was all the more painful for the Polish soldiers: despite their heroism and sacrifice they were robbed of the right to pride in their contribution on the battlefield. Attempts were made to tarnish the honor of the General. After the war, the bitter fate of emigrants awaited you. And all the while your hearts yearned for Poland…
In the name of historic truth it is impossible not to ask the question: why were attempts made to denigrate the good name of General Sosabowski, to assign to him some of the blame for the defeat at Arnhem? Perhaps the answer may be drawn from Winston Churchill’s observation that some generals try to win in their memoirs the battles they lost on the battlefield. So perhaps the time has come to open the archives and bring the truth to light. For, as a great writer once remarked, even lying inevitably leads to the truth.
According to Sir Brian Urquhart vanity and ambition had blinded the command of Market-Garden Operation. Without a sober assessment of the situation, defeat could not be avoided. Still, that does not devalue the Polish-British brotherhood-in-arms forged in combat at Arnhem. We remember with gratitude that the monument to General Sosabowski was founded at the initiative of Sir Urquhart and the British veterans of Arnhem.

Dear Polish Veterans,
The 1st Polish Independent Parachute Brigade commanded by General Sosabowski has a deservedly proud place in the history of the Polish armed forces. I pay tribute to you for your unsurpassed courage, patriotism and determination. You went into mortal combat so that we could enjoy peace and democracy. Living today in a free Poland, we can dedicate ourselves to building a common Europe: without borders, without prejudice, without hatred.

Dear Dutch Friends,
We also pay tribute to the Dutch citizens of Driel and other towns where the Poles had fought. Special appreciation is due to Cora Baltusen, founder of the Driel-Polen Foundation, to her family and all those who have cultivated the memory of General Sosabowski’s soldiers in the Netherlands. It is thanks to you, dear friends, that today I am able to bow my head before the flag with the orange sash of the Military Order of King William, in honor of the heroes of Arnhem and other Dutch battlefields and in gratitude to the inhabitants of this land, who had persistently campaigned for memory and truth. It is thanks to you that the General has been justly honored. It is a great nation that cherishes memory and justice.
Poles had fought “for your freedom and ours”. You responded with heartfelt gratitude and unflinching memory. I thank you for this on behalf of the Polish Government and the people of Poland.