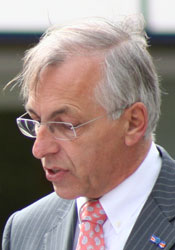 On behalf of the Driel-Polen Foundation I would like to welcome you all to this commemoration, where we give special attention to the contribution of the 1st Polish Independent Parachute Brigade to the battle of Arnhem – 64 years ago.

A special word of welcome to

The Polish Veterans, who could make the way from their home to Driel
Mr. Jaroch
Mr. Dimbinski
Mr. Kowalczyk
Mr. Staskiewicz
Mr. Oleszczuk
Mr. Alexander
and also to the widows of Polish veterans one of whom has come from Canada and three from Poland and a few from the Netherlands

The Queen’s Commissioner for our province Mr. Cornielje
The Ambassador of the Republic of Poland His Excellency Mr. Stańczyk & Mrs. Stanczyk
The Ambassadors of Great Britain and representatives from the United States of America and Canada
The Mayor of this municipality Mrs. Tuijnman
The Commander of the Sixth Polish Air Assault Brigade General Knap
All the members of the Sosabowski family
The representative of the British veterans Brigadier Dauncey and Mrs. Dauncey
On behalf of the Royal Air Force Air Commodore and Mrs. Oborn
The Mayors of the partner municipalities of Overbetuwe in Germany as well as Poland
Mr. Drexelius from Usingen in Germany and
Mrs. Gerdeman from Zulpich in Germany
and from Boleszkowice in Poland Mr. Wozniak
All the British veterans present this afternoon

A year ago the Polish journalist Joanna Pieciukiewicz contacted a colleague associated with the website Polonia.nl. She wanted to get some information on the Military Order of William and the Bronze Lion awarded to successors of the First Polish Independent Parachute Brigade as well as General Stanislaw Sosabowski.
She wanted to produce a documentary about the work the Dutch have done to provide their countryman with more information about the events of September 1944 and to compare this with the lack of knowledge in her own country about those days.

She was advised to travel to the Netherlands immediately so she could participate in the commemorations to be held at the end of that week. At the end of her visit she told us she was perplexed about the relations between Driel and Poland.

In November 2007 she visited the Netherlands again this time together with her crew for interviews and to gather other material for her documentary. In June the result of her work were broadcasted on the Polish World Service – TV Polonia. It soon became clear that a lot of her countrymen saw this documentary and that their interest in the history of the Brigade and General Sosabowski as well the commemoration in Driel has increased.

Present at this commemoration are 50 people from Trzciñsko Zdrój in the south of Poland together with representatives of Graft-De Rijp – the municipality with whom they are twinned. Later this afternoon a choir from the region of Cracow will visit Driel on their way back home from Brussels.

Yesterday the Polish Embassy in The Hague organized a presentation of the documentary for invitees. At 17 hrs this afternoon the documentary will be shown here in Driel.

As we speak, Polish television is making pictures from this commemoration and these will be broadcast on television in Poland within the next few days.

One of the aims of Cora Baltussen was to ensure that the history of the First Polish Independent Parachute Brigade and General Stanislaw Sosabowski was better known in Poland. This wish was not always an easy one to fulfill and things often did not progress as she would have liked. Probably she never dreamt that after her death this would finally happen and that more and more Polish people come to known about what happened during those moments in history.

We are convinced that – in Poland – interest in this history and this commemoration will continue to grow. And we will be pleased to help this process in whatever way we can.