Address by the by the Minister of Defence, J.A. Hennis-Plasschaert 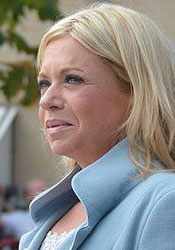 at the 70th Commemoration of the contribution of the 1st Polish Independent Parachute Brigade to Market Garden
Driel, 20 September 2014

Your Majesty, Mr President, Your Excellences, Ladies and gentlemen,
First of all I would like to extend a warm welcome to you, Mr President and to the veterans gathered here today
Your presence here means so much to us.
Our heritage of freedom is built upon your brave sacrifices.
We are deeply grateful to you!
It’s your story we commemorate today.
Please allow me to continue in Dutch to share that remarkable story.
Ladies and gentlemen,
It had to be the decisive battle. Operation Market Garden.
Now 70 years ago.
Bringing down the nazi regime – and before the Christmas of 1944 – certainly was an ambitious plan.
The South of the Netherlands was liberated.
But the operation met with disaster on the North side of the Rhine.
The German resistance was unexpected and fierce.
A large section of the airborne troops became trapped at Oosterbeek.
They fought very bravely just 2000 steps from here, but the odds were simply against them.
Ammunition, food and water all started running out. The situation became more critical by the hour and they had been waiting for the much needed reinforcements from the South of the Netherlands for days.
Veterans from the 1st Polish Independent Parachute Brigade,
You were dropped above Driel’s meadows and orchards on 21st September 1944, the fifth day of Operation Market Garden.
You had undoubtedly imagined things quite differently.
After Poland had been conquered in 1939, you fled your homeland, in order to eventually end up in the Scottish Fife.
Under the inspiring leadership of Major General Sosabowski, you were turned into a tough and skilled parachutists brigade in just three years’ time.
With that one goal: Poland’s liberation.
But you ended up fighting here. And all this whilst – 1600 kilometres away – Warsaw was on fire.
You were fighting in another country. For other people.
With an impossible task, to cross the river and strengthen the Oosterbeek lines.
The Driel ferry seemed to have disappeared upon your arrival.
There were just a few small rubber boats. Without paddles. That was all.
A small part of your brigade managed to reach the other side with pioneer spades, rifle butts and even your bare hands.
Sten guns against artillery and tanks.
It was an unfair battle, with terrible losses.
However, your arrival was an enormous moral boost for the closed in para’s.
Plus you formed a bridge head here in Driel for four days, which allowed many allied forces to be evacuated across the Lower Rhine.
They would definitely have been lost without your steadfast actions.
Your efforts mattered.
And much more than that.
Doing the maximum with the absolute minimum!
70 years on, your courage, your determination and your unsurpassed resilience is still inspiring people.
A very harsh welcome was waiting for you back at home after the war.
The unbelievable happened.
You ran the risk of being prosecuted in Poland.
After all, you had been fighting on the side of the Western allied forces. Rehabilitation didn’t follow until many, many years later.

Mr President,
Nowadays Poland and the Netherlands maintain intensive political, economic and cultural relationships and we are loyal allies in both the NATO as well as the European Union.
The relationship between Poland and the Netherlands is certainly one to be nourished.
The developments of the past six months have once again confirmed that our freedom is never something we can take for granted.
And the NATO summit, which took place at the beginning of September, therefore also marked an important moment in our transatlantic security agenda.
Let it be clear to everyone; the security and stability of the alliance is something which is important to all of us.
Side by side. For and with each other.

Veterans present,
70 years ago you laid the foundations for the freedom we can enjoy today.
And you went to absolute extremes to make this happen.
An eye witness said – and I quote:
“They fought until there was nothing left to fight with – and then they fought some more.“
The Netherlands is incredibly grateful to those Polish heroes.
We are grateful to you!
And the challenge is to do justice to our freedom. Every single day.
The freedom which you fought so hard for.

Our gratitude is endless!
Dziękuję bardzo!