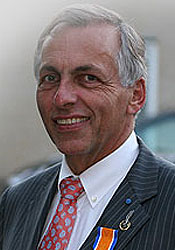 “Seeing is
believing”, those were the words often uttered by your friend Cora Baltussen in
the last weeks before she passed away, when members of her family told her the
rehabilitation she wanted so desperately would be announced imminently. She
unfortunately passed away on 18th November 2005, 3 weeks before the announcement
was made. This is why we have placed a bouquet of flowers on her grave next to
the church today, to ensure she is also involved in the joy surrounding the
presentation of the Military Order of William and the Bronze Lion.

After the official presentation ceremony in The Hague yesterday, we have the
opportunity to further involve the Driel inhabitants in this joyous occasion
today. You can take a closer look at the banner with the Cravate and the
Military Order of William today.

The Polish 6th Attack and Assault Brigade continues the traditions of the 1st Independent Polish Parachute Brigade
in Poland. A fantastic opportunity to allow the history of General Sosabowski and his men to continue to exist. In addition to this bond, there are also many scouting groups which link their name to General Sosabowski and actively make
use of this.
The Sosabowski family is present with the bravery honour, the Bronze Lion, which was posthumously awarded to General Stanislaw Sosabowski. The family will offer this honour to the Airborne museum this afternoon, where it will be on permanent display.

The Driel population has shown its appreciation for the battle which the 1st Independent Polish Parachute Brigade
fought in and around the village, as part of the Battle of Arnhem, since 1946.
One of the veterans, who lived in the Netherlands after the war, characterised the relationships during a radio interview in 1999 as follows:
“when you are here in Driel among the people, you feel as if you have returned home, back home in Poland in my own village”. These few simple words give an excellent indication of the relationships which were formed
between 21st and 25th September 1944. It is therefore not surprising that, on 21st September 1945, the inhabitants adopted the graves of those who fell in battle and sent a photo album to General Sosabowski. This also included a document with the inscription “Bound by Friendship and Gratitude”.

The first monument for those who fell in battle was unveiled on 21st September 1946. The current monument, which was erected with money collected from private individuals, was unveiled by General Sosabowski in 1961.

This monument will serve as a constant reminder.
As the designer conveyed at the time, the pedestal symbolises the Polish People.
“A dynamic concrete element rises from the pedestal: Polish strength of mind and fearless courage.
From here a figure of youth appears, the future which holds freedom as valuable property, as a true jewel.
During dark times this almost seems to disappear, but this is only appearance. Freedom is always there and whilst concentrating on the national powers, it gives Poland courage and strength of mind and new standing time and again”.

Most of you were also present in September 2004 when we celebrated the 60th Commemoration. At the time we expressed the hope that a possible awarding of a military honour may bring us all together again in Driel.
Considering your age, for most of the veterans and widows it will probably be the last time we can welcome you here. You can certainly rest assured that the friendship bonds will continue on.

The monument, the various other remaining memories in this village and the contacts which have been established
between the Driel population and various groups in Poland, will contribute to the continuation of the phrase on the 1945 document:

BOUND BY FRIENDSHIP AND GRATITUDE