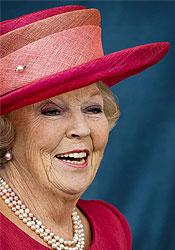 I am happy to welcome you all most cordially to this ceremony,
at which two prestigious Dutch honours will be conferred on Polish heroes who
played an important role in liberating our country at the end of the Second
World War.

It is a particular pleasure to first of all greet the Polish
veterans who are here this morning. Today we honour through them the
ninety-three Polish soldiers who died during the Battle of Arnhem, or who later
succumbed to their wounds. We honour too those who have died since then, and
those who are unable to attend the ceremony today.

I should also like to
warmly welcome the members of General Stanislaw Sosabowski’s family, in
particular his grandsons, who have agreed to accept the decoration awarded to
him posthumously on their grandfather’s behalf.

I also greet the members
of the Sixth Polish Air Assault Brigade, which continues the tradition of the
First Independent Polish Parachute Brigade and whose commanding officer will
receive the award on behalf of the Brigade.

Furthermore, I greatly
appreciate that representatives of the Polish Government and Armed Forces, who
emphasise with their presence the value attached to this tribute in
Poland.

I should like to say a word of thanks to the holders of the
Militaire Willemsorde – both individuals and units – and of the Bronze Lion who,
by being here, bear witness to their commitment. That applies in particular to
the representatives of the Eighty-Second US Airborne Division, who also fought
in Operation Market Garden and are in our midst today to pay their respects to
our Polish liberators. We greatly appreciate you all joining us to mark this
occasion.

Since the war we have remembered our dead and celebrated our
liberation every year. After the fall of the old regime when Poland resumed its
place as a democratic country among the European nations, the Polish and the
Dutch could come together for the first time in a solemn ceremony. In
celebrating our liberation, we also express the value we attach to freedom and
our awareness that freedom is never without commitment and should never be taken
for granted.

Gratitude to our liberators is deeply felt in the
Netherlands and is expressed anew each year. Sad to say, however, the courageous
actions of General Sosabowski and his First  Polish Parachute Brigade at the
Battle of Arnhem and the great service they rendered in the cause of liberating
the Netherlands have never been formally recognised.

Queen Wilhelmina, my
grandmother, did express the wish for such recognition at that time, and my
father, Prince Bernhard, often urged that the valour of the Poles be
acknowledged. Unfortunately, their wishes were not carried out at the time. The
immense changes that took place in Europe after the war and the terrible
consequences they had for Poland played a part in this omission.

The
award by the Dutch Government of the two highest decorations for bravery our
country can confer, the Militaire Willemsorde to the First Independent Polish
Parachute Brigade, and the Bronze Lion, posthumously, to its commanding officer,
General Sosabowski, redresses this historical error. This decision finally does
justice to the Polish forces who fought for the liberation of the Netherlands
and to the exceptional courage they displayed. We honour, above all, those who
sacrificed their lives in that conflict.

You will understand that it
gives me especial pleasure to be able to fulfil today at last the wish cherished
by my grandmother and my father.

May I now ask the commanding officer of
the Sixth Polish Air Assault Brigade to come forward and accept the insignia of
the Militaire Willemsorde for conspicuous bravery, leadership and devotion to
duty on behalf of the First Independent Polish Parachute
Brigade.

I should now like to ask the grandsons
of General Sosabowski to come forward and to accept, in the name of their
grandfather, the insignia of the Bronze Lion for acts of conspicuous bravery and
leadership.